Any of these are possible in Sageuk! Roleplay in Joseon. 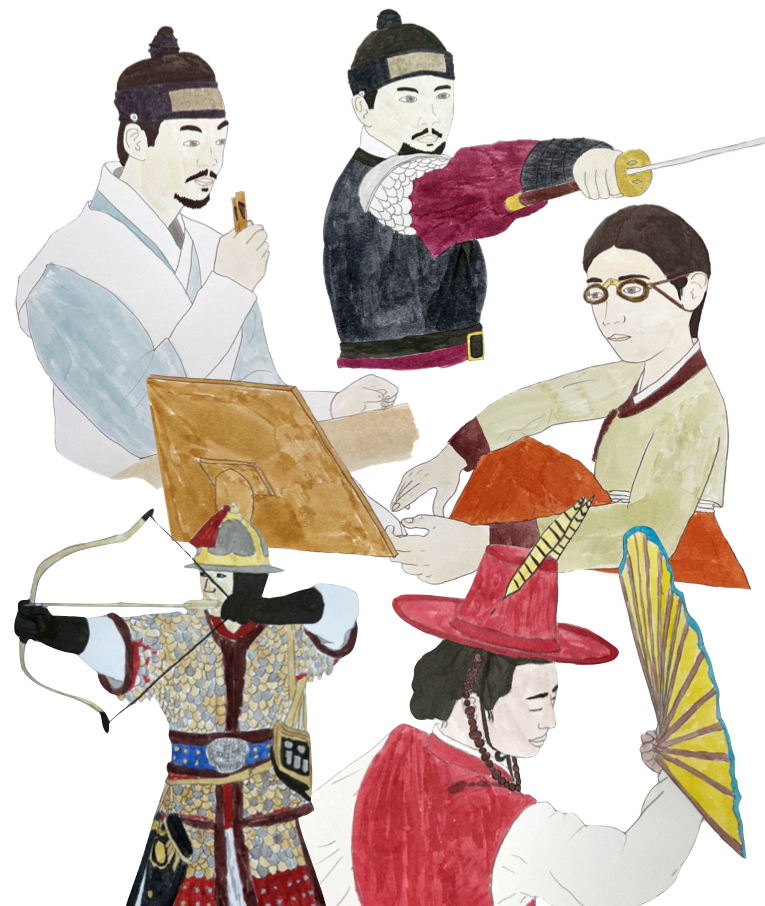 What is Sageuk! Roleplay in Joseon?

Based on the Harmony Drive SRD and 五德 - Five Powers, Sageuk! is a Tabletop Roleplaying Game (TTRPG) designed to create new sageuk-inspired stories, Korean historical dramas that have become famous in many parts of the world.  Create and play a character using a combination of Profession and Background that fit any number of genre-defining archetypeslike the Gruff Guard, the Rapscallion, the Scheming Official, the Bumbling Heir, and the Honest Seonbi just to name a few!

Designed for 18th century roleplay, Sageuk! is adaptable to cover other periods of Korean history as well or Joseon-inspired fantasy play.  This game is the core in a series of games & setting manuals currently in production. Any who purchase this game will receive a significant discount on any others released.

In order to download this TTRPG you must purchase it at or above the minimum price of $15 USD. You will get access to the following files:

Support this TTRPG at or above a special price point to receive something exclusive.

Purchases of the game add more Community Copies & 1 extra CC for each $5 above Minimum.

If you are disadvantaged or in need, please do not hesitate to get one. I made this game to be played, so please play away and share your stories with others!

Aaronsxl196 days ago(+1)
Sageuk: Roleplay in Joseon, is the perfect RPG to dive into the political and personal conflicts that make “K-dramas” beloved. Written by Bryon Casebolt of Hessan’s County, Sageuk cannot be described as anything other than the product of genuine devotion and meticulous research into the people and setting of the Joseon Dynasty. Using a unique blend of the Five Powers dice system and Harmony Drive SRD, Sageuk takes staples of TTRPG design and twists them into an utterly fascinating game.
Reply
Hessan Yongdi196 days ago

Thank you again for your kind words and review!

This game is absolutely dreamy! I love the fusion of Harmony Drive and Five Elements!
Even though I don't know anything about K-Dramas, this game made me want to know more!

The PDF is 61 pages, with large, very readable type and some great art.

It's also very user-friendly. If you're familiar with Korean dramas but not trpgs, or with trpgs but not Korean dramas, there's sections dedicated to getting you up to speed. Likewise, you're not expected to be an expert on the Joseon period. Plenty of info is provided (as well as a lot of mentions of Joseon period dramas you could 'research,' if you're of a mind to look up Kingdom or Dae Jang Geum,) and the writing is clear and excellent.

Gameplay-wise, Sageuk feels very structural. There's a session 0, a built-in safety checklist, and the overall feeling is one of cooperatively building a story rather than reacting to the choices of a single storyteller. So this isn't a game that you play to see if you'll win. It's a game you play to get into (and out of) trouble.

Furthermore, Sageuk is designed for long-form gaming. It expects you to play a campaign, not a one-shot, and it takes advantage of this by having players set Aspirations for their characters in advance.  Each Story Arc focuses on a particular PC, with the rest of the cast supporting that PC or providing B-plots, and each Story Arc has hooks for a few Aspirations. This campaign-oriented approach can take a long time to resolve, but it definitely ensures that everyone gets time in the spotlight. It also guarantees a fairly strong hook, as each Arc connects directly to at least one character's desires.

Character creation is lightly crunchy, which surprised me, and it allows you to put points into Approaches, Skills, Abilities, Drives, and more. There are also Professions, which serve as loose classes, giving you a grouping of starting Skills. Both Professions and Skills are numerous, and they all come with an extremely helpful historical writeup, plus several suggestions for how to play them. Similarly, characters receive Backgrounds, which come with even more historical context and a choice of two Abilities.

The core dice rules are explained at the very back of the book---so some game terms will be introduced before the reader understands them---but with that said, they're pretty easy to understand. You roll a Yang pool (based on skills, stats, and advantages in the story) vs a Yin pool (based on your opposition.) Then you cancel out dice from the two pools according to a chart until only a few dice remain. If you have as many remaining Yang as Yin, or more Yang than Yin, you succeed.

Taken as a whole, Sageuk feels very stable and well constructed. It provides its players with a lot of resources, but it doesn't overload or ask too much of them. Historical context is always there for players who need it. The core dice are relatively simple. And there's enough texture to character creation that you feel like you're building something durable. The only element the might be missing is a starter scenario, for groups who aren't comfortable enough with the Joseon drama genre to put one together from scratch.

Overall, if you like storytelling rpgs, and if you enjoy (or might become interested in) Joseon historical dramas, I would strongly recommend giving this a shot.

-Page 24, Art references a "skill advantage." Is this the same as adding 1 Yang die?

Thank you for your review and also for pointing out those mistakes!

I wrestled on where to put the explanation on the dice mechanic because I did not want to overwhelm K-drama fans unfamiliar with TTRPGs with talk of dice before they had a chance to consider their character. I may restructure that arrangement in the future.

I did not mention it in the product page because it is still in the early stages, but I do intend on creating some example characters and an initial story arc as a sort of Starter Kit.

I don't think it's a bad thing having the dice mechanics at the end. Honestly, I'm not sure there's a right place to put it. Too soon and it overwhelms the lore, too late and the mechanics feel disconnected.

It just stood out for being at the very end when there was a bunch of stuff that referenced it earlier in the book.

I wouldn't sweat this too much. Maybe a link to it from an earlier section is all it needs?

Will there be a pod edition?

That is an interesting idea! I will certainly look into it and post an update if I do decide to set up a PoD option in the future.

For the moment, I am focusing on finishing up the layout and art where it is still rough in this version and creating a Print-Friendly version for people printing at home. 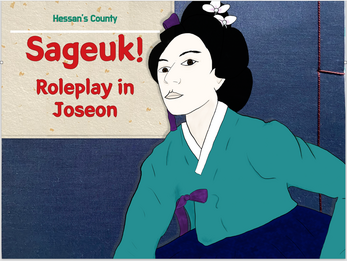 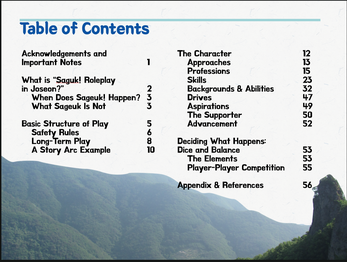 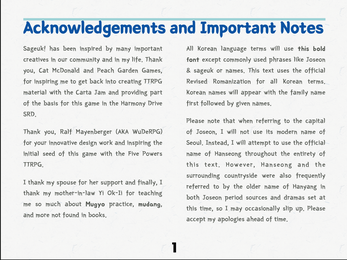 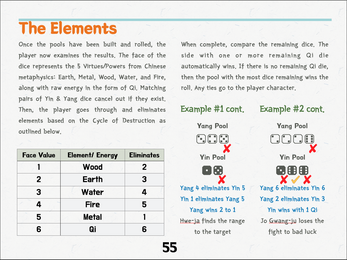 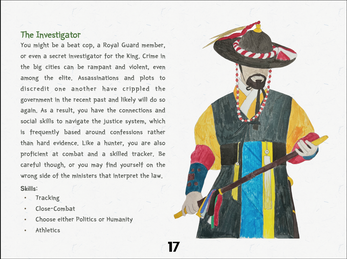 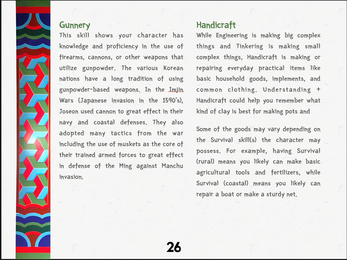